In 2013 I was going to constant appointments at the VA being seen on a regular base for my PTSD and a diagnosed TBI (Traumatic Brain Injury). It was not long into 2013 when my Social Worker recommended and suggested I get a service dog to help me. My social worker recently learned about a new organization out of Chelmsford called ‘Operation Delta Dog‘. This program rescues dogs from shelters and trains them to be service dogs from veterans with PTSD and TBI. Based on that, my social worker felt I qualified and thought it was worth looking into.

After a few months of doing paperwork, figuring things out with my social worker we finally got to the time to schedule our first ‘Meet-and-Greet’ with the organization. I was advised that the program was just starting out, and they were still working on raising awareness and support of the program. I would be the 4th veteran that they paired a service dog up with.

I agree that if the pairing up was successful, I got a enrolled in the training program, and I was getting a positive impact from my service dog then I would do everything I could to help and support the charity. It was not long after that that I met the little guy that change my world – MOCHA. 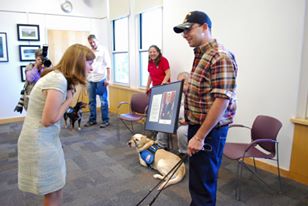 After a year of training, attending classes weekly, doing homework assignments and learning more about dogs that I could of ever imagine – Mocha and I graduated from Operation Delta Dog’s training program. Our Graduation Day was the first one for the organization and featured their first patch of service dogs. At the graduation I felt compelled to return the favor and give a gift to the organization, as they have just given a huge gift to me. After months of making phone calls to the White House I received a personal letter from President Barack Obama and self portrait that I had professionally famed. To me this was the biggest honor I could give back to them.

From Recipient to Veteran Outreach Coordinator

As being graduated from the program from a couple of years, and Delta Dog growing with great success the need for extra volunteers and help grew as well. Joining the Delta Dog team in 2015 as ‘Veteran Outreach Coordinator’ I help and support newer veterans with any questions or concerns, as well as doing my best to assistance other veterans within the program using my resources at the VA and other areas, as needed. I also have taking veterans and from appointments and in any other way needed.

To date I have helped pair of 3 veterans with service dogs, and have had a dog in the program named in honor of a fellow battle buddy that lost his fight to PTSD, Maguire. In addition to all of this I’ve also set up and organize the following fundraiser events.